We’ve just launched a new beer called Larkspur. I had two pints of it the other night and it made me weep. Why would beer make me cry? 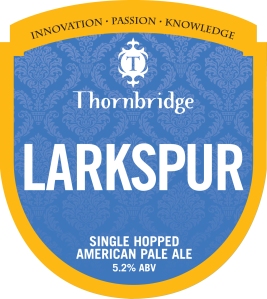 Is it the nose of ripe tangerine, those oil filled cells that burst and sting your eyes when you hedonistically squeeze the loose peelings, knowing the citrus bouquet that lies within?

The mango that has fallen from the tree and is sliced open on the spot, it’s heady, tropical fruit sweetness invading the senses and transporting you to a beach on Thailand.

Is it the pull of passionfruit, just like those I would pick from my Nana’s passionfruit vine? Their skins all wrinkly after the sun had ripened them to perfection. The burst of flavour as I would bite through the hard skin to reach the rich, juicy pulp inside?

Larkspur is all of these. The fascinating Citra hop from America delivers and incredible tropical fruit salad of aromas. It fools me into thinking I’m drinking juice. The power of the flower.

We only got ten kilograms of the hop this year and already I dream of next year and the possible bounty that will arrive from the American hop harvest. This is what makes me cry! We only brewed thirty five casks of this beer. We based it on our Kipling malt recipe and then used Citra instead of the New Zealand Nelson Sauvin we use in Kipling. This allows us to find out how the hop behaves in a beer we already know a lot about. We can look at it’s perceived bitterness, the flavours, the aromas and of course the drinkability.

The parentage of this hop is also quite interesting… a real international mix of  German Hallertau Mittlefrueh and Brewers Gold, American grown Tettanger and British East Kent Golding. Who would have thought the heady mix of fruit salad could have come from such an interesting blend of hop mothers and fathers?!

It’s been great to see a bunch of breweries around the country use Citra to great effect. I just wish they would all stop so we could brew some more.

Larkspur. If you see it in a pub, taste it and let me know what you think…