Sometimes thinkers, sometimes raw power, the inside and outside centre work as one of the great partnerships on the rugby field. Always communicating, deft at moving the ball with the skill of David Bowie from the Labyrinth (you must remember all the cool things he used to do with those little glass spheres) and having the ability to destroy the opposition with superb textbook tackling, it is this combination that can be key to the backline in both attack and defence.

Think of those great combinations throughout the years – Walter Little and Frank Bunce, Tim Horan and Jason Little, Phillipe Sela and Thierry Lacroix, Gordon D’Arcy and Brian O’Driscoll, there has been some brilliant rugby played by these lads, but they’d have nothing on the ultimate brewer combination…

Someone with smarts, a sidestep larger than the ones you’d need to climb the Pyramids and the tendency to sneak through the opponents defensive wall, there can be only one Kiwi brewer that would make the grade. Stephen “The Plough” Plowman of Hallertau Brewbar and Restaurant is so named for two reasons: 1) The obvious one – his ability to plough through the opposition’s defence. 2) His unerring skill of devouring an entire Ploughman’s lunch by himself. When the lunch was intended for the whole team.

Although slight in stature, The Plough has a physiological condition that means his bones and muscles are twice as dense as the average human. He may look 70 kg, but due to his anomaly, he actually weighs in at 140 kg, making him one of the most powerful men on the team (second only to the mighty Dave Kurth of West Coast Brewery). Due to this, his need for cheese and ham and other protein-rich foods is incredible. In fact, the NZ Brewing Dream Team has two catering companies assigned to it. One for The Plough and one for the rest of the squad. His other nickname… Stuntman, refers to his immunity to fear, he smashes his opponents left, right and centre and his ability to offload the ball to players around him borders on the divine.

With such a communicative and powerful inside centre, the outside centre has to be about size and skill. We need someone built like a lighthouse, able to take a thrashing from the opposition yet be sturdy and safe as houses under the high ball. They would need the smarts to spot a gap and set up their team mates for the perfect pass as well as having arms like tree-trunks and the ability to phagocytose members of the other team. Who better than the mighty Dick “The Gentleman” Tout of Lighthouse Brewery in Nelson to take on the mantle of the mighty centre!

This man is all about the team. He keeps the squad together with his brilliant anecdotes and yarns, his jokes ensuring the NZ Brewing Dream Team works its abdominal muscles to their full potential. He is sound, he is solid and he is 100% dependable. One of the more experienced members of the backline, Tout is the Tana Umaga to pair perfectly with The Plough’s Smokin’ Joe Stanley toughness. I’d pay top dollar to watch the pair smash any other centre pairing in world rugby. 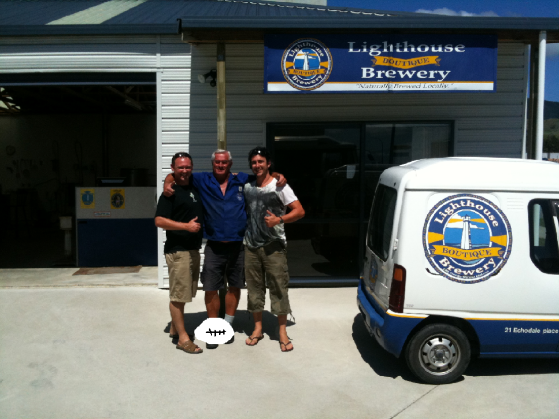 Coming soon… the Outside Backs!