For the past couple of years, Rowley’s Restaurant and Bar in Baslow, Derbyshire has hosted a Thornbridge Brewery evening. Rowley’s is run by Max and Susan Fischer (who run the one Michelin star, Fischer’s, at Baslow Hall) with head chef Rupert Rowley the star of the show. The event is brilliantly run by manager Alistair and is definitely one of those things that I look forward to every year.

The event kicked off with a welcoming reception Jaipur matched with some delicious hot and spicy nuts, a veritable assortment including two of my favourites, pecans and cashews, with the lovely honey sweetness and subtle heat from the snack combining simply with the sweetness and bitterness from the IPA.

From there it was upstairs to the intimate dining room and we were welcomed with a lovely Hopton. I’m always pleased every time I taste this beer. It was brewed as an ode to the Bramling Cross hop. There were a couple of seasons where we couldn’t really get much of this and as brewers we really missed it. When we nosed last seasons hop cones at Charles Faram Hops in Herefordshire, we were blown away by the delicate citrus and wildberry characters… something that Bramling Cross isn’t known for. I’m sure there was a crop many moons ago that was characterised by blackcurrant or ribes characters and from that moment on every brewer that ever used it was convinced that no matter what season or what crop or what batch they came across, it would always have this blackcurrant character.

Not any more! The new crop has even more pronounced citrus characters as I mentioned here and there was quite a lot of variation depending on what farm and in what county it was grown. That’s one (of the many) things I love about brewing, so many variables that are all combined to make a (hopefully) great pint time after time! But, as per usual, I digress.

The Hopton was paired with Scottish Salmon cured in Hops alongside a smear of Apple Puree, some finely julienned apple and some tiny cubes of Hopton Jelly. The cold-smoked salmon, as it does, had that lovely subtley smokey,fishy character and I was impressed how the hop and the biscuity malt (provided by a good amount of Amber malt in the beer) actually stood up to this. It highlighted how important it is to have quite a flavourful beer to muscle it’s way through when pairing with smoked fish. The jelly and apple accompaniment provided a nice textural contrast to the soft salmon and the puree, when used sparingly, also added a layer of sweetness to the dish. Too much puree though and the apple overpowered the flavour of the salmon. It was an interesting start to the meal.

Next up was a ridiculously tender Ox Cheek that had been braised in our Raven IPA and Black Treacle and was accompanied by Colcannon Potatoes and Crispy Bacon. This dish was amazing. The glutinous cheek crumbled away into moist strips when touched by the fork and the creamy, light mash was so smooth in the mouth. This was matched with McConnel’s, our Vanilla Stout and I was really pleased that it was our latest batch. We have just sourced some amazing vanilla pods that are so intense, I can still smell them every time I walk into the Hall Brewery coolstore. The vanilla and berry character of the beer worked well with the sweet beef and the crispy bacon, with it’s slight charred character also brought out lots of roasty characters from the stout. Another good match. 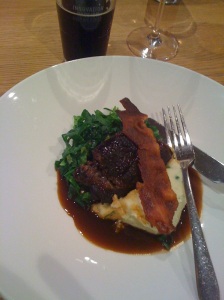 After that came one of the best versions of cheese on toast I’ve ever had. Our Black IPA (or Cascadian Dark Ale, or whatever the hell you want to call this style of beer… it’s dark in colour and smells and tastes like an IPA, so it’s Black IPA for us!), Raven was used to make a moist, slightly dense bread that was toasted and topped with Swaledale Old Peculier cheese. I have since found out that this cheese is soaked in Theakston’s Old Peculier, hence the name I guess (I is smaart). This was served with liberal dosings of Hendersons Relish and we were even treated to a sample of Rowley’s Hendersons Relish puree, a lovely addition. Paired with the Raven, this was another great combo. Pretty much beer and cheese on toast is awesome no matter what! With a big fruity nose, all unripe mango skin and unripe gooseberries and the almost stinging top palate bitterness, this allowed the soft, smooth cheese to reign supreme, it’s fat coating and dissipating the BIGness of the Raven. Then you’d have another sip of the beer and the former cheesy king would be relegated into the underworld and the fantastic combination of American and New Zealand hops would weave their magic on the olfactory bulb and the bitterness receptors. Good stuff.

On an aside, we love Raven, it’s a great juxtaposition of a beer. It might not meet the style guidelines that it’s meant to, it might not be the ideal pint of the nation, but some people love it and that’s what matters to us! Interestingly, Maggie, the lovely lady I was sitting next to at the dinner confessed she’d never really drunk beer and didn’t like it at all. She really enjoyed the Hopton (win!), couldn’t get her head around the McConnel’s (due to the colour) instantly thinking it would be too heavy (loss), but then the Raven came around and I asked her to take part in my little test, got her to close her eyes and have a sip and she loved it (win!). She loved the fruitiness and the big, bold, almost grapefruity bitterness and that definitely put a smile on my face. If only we could get more people to just taste beer!

It was now last course o’clock and we were on to a decadent Frozen Malt Parfait, Bitter Chocolate Sorbet, Hop Crispy Crunch and crazily, Lord Marples “Butter Beer”! The Butter Beer showed off the bitterness of the Marples but was deftly blended into an almost eggnog like drink with hints of nutmeg and  a creamy texture. Served warm this was an interesting contrast to the deliciously sweet parfait. The Hop Crispy Crunch was a sugar and crumbled hop flower affair, essentially a sweet for beer lovers and made the dessert look fantastic with it’s added dash of green.

Finally, it was local chocolatiers, CocoaDance of Castleton with their lovely Jaipur chocolate truffle and a lovely, mild coffee to finish the evening. Alistair came out to tell us the recommended way to eat the chocolate – place it in your mouth, crack open the milk chocolate shell, then let the truffle mixture coat your tongue to allow the Jaipur character to make itself present before phagocytosing (that’s my word, I made it up) the other chocolate with reckless abandonment. I love chocolate 🙂

Another incredibly brilliant night was over and it shows me, yet again, how brilliantly beer and food can work together. I know it has it’s naysayers, but I bet you that none of them were at Rowley’s enjoying what I was enjoying! Already can’t wait until next year!!!