The enigmatic, zymurgical genius that is Stefano Cossi was honoured last night with what I can only describe as the highest accolade in UK Brewing. The All-Party Parliamentary Beer Group acts to promote the wholesomeness and enjoyment of beer as well as highlight the importance of the British pub and the social, cultural and historical importance of the brewing industry. The Brewer of the Year award is recommended by the Institute of Brewing and Distilling and is an amazing acheivement!

Stefano hails from the North-East of Italy, where he studied a Food Science degree at Udine before heading north to the UK to begin a brewing career with a brand new brewery called Thornbridge. Nestled away at the base of the Pennines close to the picturesque Bakewell, Derbyshire, the little 10 bbl brewery was made up of salvaged kit and originally manned by Stef, Martin Dickie (of Brewdog fame) and consultant and master brewer Dave Corbey.

Almost six years later, Stef is still here, working twice as hard and helping revolutionise the UK craft brewing industry with his exacting, scientific approach, brilliant understanding of flavour and aroma combinations and inability to compromise when it comes to quality. Not just the quality of the raw materials, or the beer that we produce, but also of the brewery itself. Over a period of a couple of years, Stef worked tirelessly to get a conceptual brewery from ideas and imaginings right through to a finished product. I had the enviable task of being involved with this and can honestly say that Stef’s eye for detail is second to none. He assimilates scientific papers and brings the theory into practice and like all good brewers, is all about continuous improvement.

The ideas that Stef comes up with have always impressed me as a brewer. Bracia is a fine example. Stef had bought a load of chestnut honey from a local producer close to his family home in Italy with the idea of using it in a beer. I remember smelling and tasting chestnut honey for the first time with him, amazed at the complexity and completely unique character it had, unlike any other honey I had tasted. A recipe was formulated, we brewed the beer and still, to this day, every time I crack a bottle of my dwindling supply from that very first brew, I am amazed. It takes skill and foresight to do this. Stef has bucketloads of both. This can also be seen with our barrel-aged beers. Stef visiting sherry-producing regions, sourcing Pedro Ximenex and Madeira barrels for aging, absorbing loads and loads of information on the wood-aging of ports and sherries and whiskeys and wines and applying this to beer.

For myself, coming in as a new brewer back in 2006 and for a time, just the both of us running the original Hall brewery it has always been interesting working with Stef. We had both studied Food Science, so had similar backgrounds. I had come from a big brewery environment and Stef from small. It was great to see our ideas and concepts meet somewhere in the middle. It was cool for me to downscale big brewery ideology and begin crafting and (I’d like to think) for Stef to see my background and approach that to craft. It was fun to brew my very own recipes for the first time… experimenting and constantly evolving already established beers. This approach has been absorbed by our entire team. Every one of our brewers is given the opportunity to do this. We have no tradition at Thornbridge and don’t find it all that necessary to follow certain styles or practices. We just want to make great beer and this is something that Stef has helped foster. 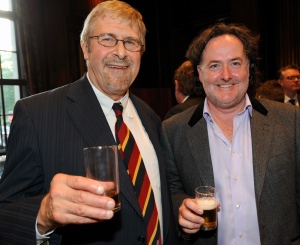 Legendary Roger Protz and the man behind Thornbridge, Jim Harrison, share a beer (hopefully it's Jaipur!)

Our brewery director, Jim Harrison, sums it up, “Well deserved for Stef, but also to everyone at Thornbridge for the amazing teamwork that allows us to compete at this level”. I agree!

In my mind this is a major step for microbreweries. This type of accolade is often given to well established brewers of regional or even larger breweries and for one of the little guys (we run a 30 barrel brewhouse) to be on the radar with regards to the pursuit of brewing excellence, it has to be a great thing for the burgeoning craft industry.

Would I say that Stef is a perfectionist? Absolutely! Would I say it helps us as a brewery produce the best beer we possibly can? Undoubtedly! It seems like others think so, too!! 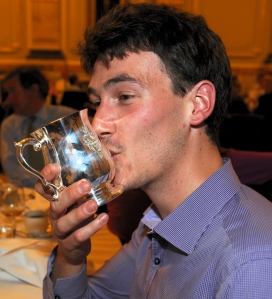 Stef tests to check if his tankard is stainless steel 304... ideal for brewing vessels you know 🙂

17 thoughts on “UK Brewer of the Year, Thornbridge’s Stefano Cossi!”