Still all go and we’ve just finished an awesome collaboration with Luke Nicholas of Epic Brewing Company over in New Zealand. Luke was over here to launch and promote Epic Pale Ale which he had been invited to brew with Everards Brewery in Leicester as part of the JD Wetherspoons International Real Ale Festival. Luke is a highly awarded New Zealand brewer with a vast amount of experience. He has twice brewed beers that have won the Supreme Champion Beer of New Zealand (including Epic Pale Ale, which won in 2006) as well as scooping Gold and Best in Class awards at the 2008 BrewNZ competition. Coupled with the fact that he has twice judged in the World Beer Cup (Seattle, 2006 and San Diego, 2008) you can see that he’s no stranger to both brewing and judging a beer! 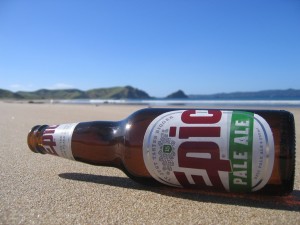 Although we are both from NZ, this was the first time our paths had crossed. You have to remember that everyone knows everyone else in NZ, so this was no mean feat! How can I describe Luke? He is very confident and oozes self-belief and passion. He has an intuitive understanding of the world of craft beer and has literally worked from the bottom up. He told me of how he used to volunteer his weekends at a local Auckland brewpub chain so he could learn how a commercial brewery worked (Luke was a passionate home brewer prior to this) until he was employed and gradually worked his way up in the brewing world. Commitment seeps from his every pore and the intensity with which he talks about beer and brewing is awesome. He is engaging, intelligent and the type of person that us Thornbridgers love to hang out with.

It was a big step to decide to collaborate with someone that we did not know. We hadn’t tasted his Epic beers or met him; however it was an opportunity not to be missed. In hindsight, I would have been gutted had we not brewed together. We had a great day and even got to try some of Luke’s beers, which were fantastic!

I met up with Luke the night before our brewday at the Chesterfield Arms in Chesterfield, where Everards were launching a Meet the Brewer evening and where Luke had a coveted mini-cask of the Epic Pale Ale that had been brewed with Everards. We sat down and had a few pints of the Everards beers and then got a chance to try the cask Epic. This stood head and shoulders above the Everards brews (which were all good pints nonetheless) with a dominant citrus hop character, a little grapefruit with some underlying caramel maltiness. Luke told me that Everards were shocked when he told them how much hops he wanted to put into the beer. I think he should have put in even more! 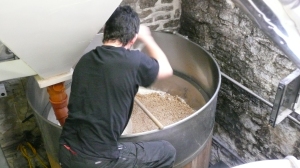 Kelly prepares a breakfast of malt porridge for the hungry Thornbridgers. Where's my spoon?

It was time for the brew and myself, Luke, Dave and Stef were ready for action. The mash in the mash tun and vessels cleaned and ready to go, we began the mammoth task of deciding what hops we were going to use. We worked our way through a load. New Zealand Hallertau, Pioneer, Cluster, Atlas and Liberty didn’t make the cut. Chinook, however with its wonderful resinous and citrus notes and a little pine and the ultra-intense Hallertau Magnum made the grade. We thought these two hops would provide a nice resin-pine-citrus backbone as both early and late additions and allow our other two hop choices to shine through. Centennial with its pungent orange zest and the unique New Zealand Nelson Sauvin (for a touch of home of course) with its mango and pineapple and gooseberry and grapefruit were the obvious pairing to give us a real New World character in what was to be a unique twist on our Halcyon Imperial IPA. 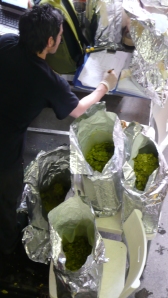 We cracked open a bottle of our Green Hopped Vintage 2008 Halcyon and started discussing bitterness. The bottled version has a touch more dryness and astringency due to a little more attenuation and a humungous amount of wet hops added at maturation, yet we thought the bitterness level (around 85 IBUs) was still well balanced by the residual malt sweetness. With this in mind and knowing that this was to be in the cask form only, we upped the ante. We went for over 100 IBUs (International Bitterness Units) in the hope that the slightly increased perceived sweetness that the less carbonated cask form would have, would then balance out the mouth puckering hops.

Because this had a bit of a New Zealand twist, Luke had the brilliant idea of bringing a little New Zealand water with him. Good Water is from Kauri Springs in Northland, above Auckland and is exactly as its name suggests! Once the brew was finished, Luke added the water to the finished brew. You can see that here!

We were also lucky enough to try a bottle of Luke’s NZ brewed Epic Pale Ale, which was absolutely beautiful. Reminiscent of some American Pale Ale’s I have tries. Quite light on the bitterness, yet retaining a lot of citrus and resin pine character. Nice carbonation and fantastic cold. No longer will I be reaching for an ice cold New Zealand lager after mowing the lawns when I’m back in New Zealand. From now on, it’s definitely going to be an Epic! Just when I thought that Luke’s Pale Ale was all that, then he brought out his Epic Mayhem. At 6.2%, this poured a nice dark orange/amber colour. The nose was amazing. Lots of sweet tropical fruits with a hint of pineapple and a floral and citrus background. I’ve always thought that Jaipur was extremely drinkable at 5.9%. Mayhem is of the same ilk. I polished off my taster quickly and instantly thought of the movie, Interview with the Vampire… I was the young child vampire Claudia after my first meal… “I want some more.” This was a ridiculously drinkable and extremely tasty drop. All I can say is well done!

Once the brew day was over, we all met up at the Coach and Horses in Dronfield for a few beers, a few laughs and some good kai (that’s the Maori word for food). We tasted the various Thornbridge beers (Luke described Kipling as being the best use of Nelson Sauvin on the planet) as well as some Mikkeller Beer Geek Breakfast, Birrificio Italiano Tipopils (one of my favourite beers ever), Port Brewing Hop-15, HaandBrygeriet Norwegian Wood (courtesy of Phil at BeerMerchants) a couple of HopDaemon beers (Green Daemon Helles and Skrimshander IPA) and my very own improvised lambic-style beer. As usual it was awesome fun and great for us all to talk about the different flavours and aromas we were picking up. 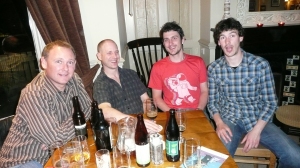 We are beer nerds!

I love my job… 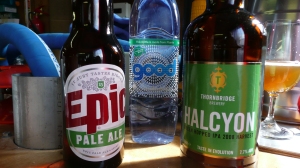 7 thoughts on “Epic Halcyon at Thornbridge”